Ryan Adams: ‘I threw out 80 per cent of my album when I heard Laura Marling’ 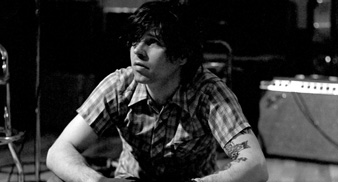 The singer-songwriter said he ditched most of the songs he wrote for his 13th studio album after producer Glyn Jones passed on her 2010 LP ‘I Speak Because I Can’. [quote]’I thought: ‘For fuck’s sake. I literally threw out 80 per cent of what I had. And it felt good to ask: ‘What am I really capable of? I felt competitive again to write great songs.[/quote]

Recorded at Hollywood‘s Sunset Sound Factory, the album will be released on his own label, PAX-AM. Jones worked on Adams‘ albums ‘Heartbreaker’, ‘Gold’ and ’29’. He is the son Ethan Johns, who worked with Bob Dylan, The Beatles, The Who and The Rolling Stones.

Adams also revealed how he slipped into a period of heavy drug taking after he was diagnosed with Ménière’s disease in 2006. This disease is a degnerative condition which affects hearing and balance.

“I didn’t know this at the time, but people have since said they were certain I would die.”

But the singer, who has since become sober, said taking opium helped him to write some of his songs. “I fully understand when people say Edgar Allen Poe used to smoke this stuff and have visions,” he said. “I wrote the entire song ‘How Do You Keep Love Alive’ [from 2005’s ‘Cold Roses’] without writing a word down, and I played it on piano. And I’ve tried to understand the chord pattern ever since, because I can’t fucking play it.”

Ashes & Fire’ is released on October 10 and coincides with a series of UK dates.