The alt.country king tries his hand at rapping 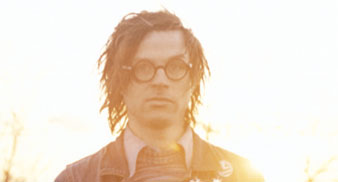 Ryan Adams has streamed a new track online at Ryan-Adams.com called “Look Who’s Got A Website” – and it marks yet another surprising new musical direction for the ever-changing Americana singer-songwriter.

The track sees Adams trying his hand at rapping in a similar style to Beck. Sounding also a bit like The Beastie Boys, Adams gives shout-outs to New York, Kevin Costner and witches.

He also takes the opportunity to rap about his recent albums and the critical maulings and low sales they’ve suffered: “Two and a half star… My record went balsa wood… basically he’s alternative country but crappy.”

The website has been revamped in a garish ‘80s retro-galactic style – with a Cardinals Radio flight deck to ensure safe passage through a moving cartoon galaxy.

It’s all guaranteed to make your eyes hurt.

Meanwhile, back on Earth, Adams is set to play London’s Shepherds Bush Empire on Saturday (September 30) – however, it’s unclear whether or not he will be on a hip hop tip.