Ruts Classic Made Over By Gallows 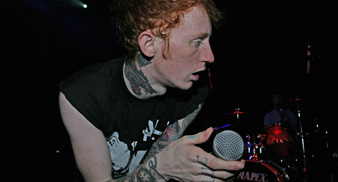 Gallows and Lethal Bizzle have joined forces to re-work punk classic ‘Staring At The Rudeboys’.

The collaboration sees the Ruts’ classic adapted and rearranged – with lyrics by Gallows’ Frank Carter and Lethal Bizzle reflecting on street life in 2007 instead of the late 70s.

Renamed ‘Staring At The Rudebois’ – the cover of The Ruts’ track is to be released on CD and 7″ vinyl on November 19.

Gallows are currently on tour in the US, before they join the entire Taste Of Chaos tour alongside such groups as The Used, Rise Against and Escape The Fate.

The UK dates are as follows: