Rolling Stone admits they are working on a project for 2008 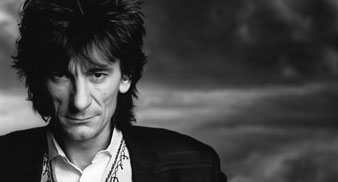 Ronnie Wood took part in a brief Q+A session prior to a screening of his concert film, The First Barbarians: Live From Kilburn last night (November 23). During one answer, he admitted he was working on a Faces-related project.

The Rolling Stone said: “I’m looking through about 5,000 hours of Faces footage. Stuff we shot on hand-held cameras, us messing around. It’s hopefully getting a release next year.”

Wood’s comments add to speculation that the Faces might reform in 2008. There are already plans to release re-mastered editions of the band’s four studio albums, and UNCUT believes the surviving former members – Wood, Rod Stewart, keyboard player Ian MacLagan and drummer Kenny Jones – have recently been in negotiations to reform for live dates in 2008.

The First Barbarians: Live From Kilburn is a concert film, a mix of colour and black and white footage, was shot in London in 1974 around the time Wood released his solo record, I’ve Got My Own Album To Do. The line up featured Ronnie Wood and Keith Richards on guitar alongside Ian MacLagan, session bassist Willie Weeks and Sly And The Family Stone drummer Andy Newark. Rod Stewart contributed backing vocals. The footage comes from Wood’s own archives and has been re-mastered by his son, Jesse.

Wood, who earlier in the day had been signing copies of his autobiography Ronnie, spoke fondly of the concert and his relationship with Keith and Rod.

On the subject of Keith’s rather dismal set of teeth, he joked: “Look at his railings. They look like a row of condemned buildings!”

“Rod said to me about five minutes before we were going on stage: ‘You’re not going to sing, are you?’ I said: ‘It’s a bit late to start worrying about that now…’”

The hour-long film is released as part of a CD/DVD package of The Last Barbarians” Live From Kilburn on Wood’s own label, Wooden.

For more musings from Ronnie Wood at last night’s screening, click here for the The View From here UNCUT blog.