Song reminds him of 'Maggie May' 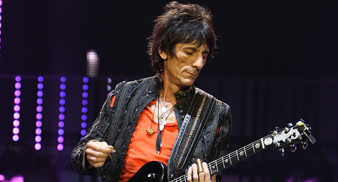 Rolling Stones’ guitarist, Ronnie Wood has been helping Starsailor with their new album.

Wood has been in the studio recording guitar parts for a song called ‘All The Plans We Made’, which will appear on Starsailor’s fourth album.

“We kept asking him if he’d be up for playing some guitar on the record, and at the time he was busy promoting Shine A Light,” said frontman, James Walsh talking to Billboard.com.

“Then I got a call about half past six one evening from his son Jesse saying, ‘My dad really wants to do this now. Can you be at the studio [at] nine o’clock?’ So from having given up the ghost it all came together out of the blue. It was amazing; he stood there playing the guitar, saying the song reminded him of ‘Maggie May’ – quite high praise, indeed.”

The band finished the new record in May, tentatively titled ‘All The Plans’, and are waiting to finalise a release date.

“It’s definitely frustrating when you’ve got a finished record you want to get out and promote,” added Walsh.