Coinciding with Uncut's exclusive Jagger and Richards interview, we have a great prize for you 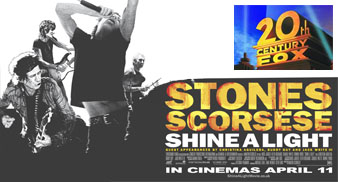 Coinciding with the forthcoming April issue of UNCUT – out on Thursday (February 28) — featuring a great interview with the Rolling Stones’ Mick and Keith — uncut.co.uk will be offering a lucky reader and a friend the chance to attend the UK premiere of their new Martin Scorsese directed film ‘Shine A Light’!

The competition includes two tickets to the premiere of the film, which the band will be attending, on April 2, plus an overnight stay at the Rathbone Hotel in London’s West End.

Grab an issue to read the interview with Mick and Keith, where they discuss their lifelong friendship — then check back touncut.co.uk from Thursday to enter and be in with a chance of winning this fabulous prize!

Elsewhere in the issue, former Monkee Michael Nesmith is the featured artist in our ongoing Pioneers Of Country Rock series, Miami Steve Van Zandt answers your questions in an Audience With . . .Thin Lizzy’s “The Boys are Back In Town” is the subject of this month’s Making Of . . . Super Furry Animals talk us through their back catalogue highlights in Album By Album and The Beatles appear in a Snapshot special.