Gimme Shelter is fully restored and comes with bonus materials 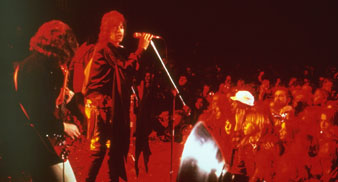 The classic Rolling Stones 1969 US tour documentary Gimme Shelter is to get it’s DVD premiere this August.

The film, named after the Let It Bleed lead track was directed by Albert and David Maysles and Charlotte Zwerin and chronicled the Stones’ tour, which finished up at the chaotic Altamont Free Concert.

The film has a supporting cast of Jefferson Airplane, The Flying Burrito Brothers and Ike and Tina Turner.

Gimme Shelter has had full restoration of sound and vision, and will come accompanied by a 40 page booklet with photos and essays about the infamous events at Altamont.

The Warner Home Video DVD release will also feature extras by the way of a director’s audio commentary and backstage outtakes of the Rollilng Stones when they performed at New York’s Madison Square Gardens.