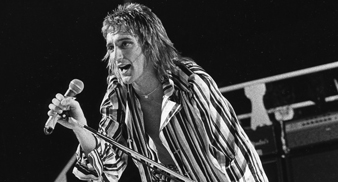 Rod Stewart has spoken about the chances of reuniting with the Faces following the announcement of their induction into the Rock and Roll Hall of Fame next year.

Speaking about the induction ceremony, Stewart was asked if he’d consider joining the band for a performance. The band reunited last year to headline the Vintage at Goodwood festival, but with Mick Hucknall on vocals. “Oh, yeah! I’d love it,” said Stewart to Rolling Stone. “If they’re all available I’ll definitely make myself available.”

Rod Stewart was inducted into the Rock and Roll Hall of Fame as a solo artist in 1994, but was unable to attend the ceremony in Cleveland because an earthquake hit Los Angeles and he wanted to stay in the city with his family.

When asked if he minded that the Faces have toured without him, Stewart responded: “No, not at all, mate. It’s something that I would want to do, but it’s getting a commitment from Ronnie [Wood] – who is hanging onto what the Stones are going to do. He’ll suddenly say, ‘Hey, let’s tour next week!’ I’ll say, ‘Hold on Ronnie, I’ve got commitments! I’ve got commitments for the next year.'”

“If we all sat around and said, ‘Let’s do it next summer, or let’s do it for charity’ or whatever reason, I would do it. It’s not totally ruled out,” he added.

Guns N’ Roses, Red Hot Chili Peppers and Beastie Boys have also been chosen as the next acts to be inducted into the Rock And Roll Hall Of Fame. They will be officially inducted at a ceremony in Cleveland, Ohio, on April 14, 2012.