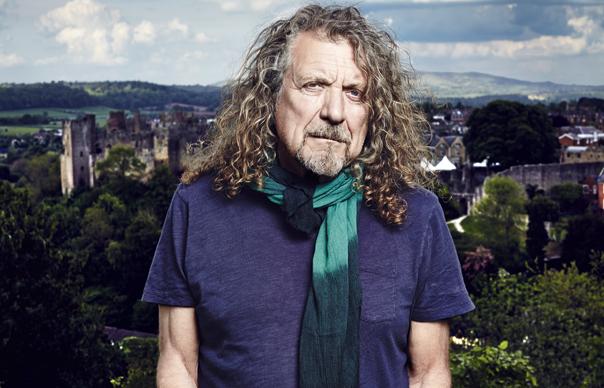 Plant’s 85-minute set featured four songs from his new album plus Zeppelin tracks “Thank You”, “Black Dog”, “Going To California”, “Babe I’m Gonna Leave You” and “Whole Lotta Love”. The 12 song-set was rounded out with the title track of No Quarter – the 1994 album Plant made with Jimmy Page – plus Bukka White’s “Fixin’ To Die Blues” from his 2002 album Dreamland and a cover of Willie Dixon’s blues standard “Spoonful”.

Dressed in paisley shirt and maroon trousers, Plant began the show with “Turn It Up” from his new album before announcing: “Let’s see what happens now” and moving into “Thank You” from Led Zeppelin II. The following track, “Spoonful”, was the first of several songs in which Plant played a handheld drum.

Introducing recent single “Rainbow”, Plant recalled how Led Zeppelin played their first London show at The Roundhouse in 1968. “Time really moves on,” said Plant. “It’s just short of 46 years since I first played here. I don’t like giving my age away like that. I’m not like Tom Jones, who loves telling people how old he is: ‘Really, Tom?’ I think that should be kept under your hat. Or under your helmet, at least… In the old days, this was what was known as ‘a single’.”

In a good mood throughout the show, Plant joked with the crowd for not singing along to the call-and-response vocals on an acoustic version of “Going To California”, which originally featured on Led Zeppelin IV. Gradually singing his parts louder as encouragement, Plant jokily shouted: “Fucking hell!” at the audience’s muted response. He then described new song “Pocketful Of Golden” as: “This is the pensive side of us. It’s all pensive, really.”

Introducing “Fixin’ To Die Blues”, originally recorded in 1940 by Bukka White, Plant recalled how he was introduced to blues music after “hanging out with beatniks” as a teenager. He said: “I was lucky enough to see guys like Son House, John Estes and Sonny Boy Williamson when they came through Europe. They couldn’t believe the reception they got, as it was like they were being rediscovered. The guy who really did it for me was Bukka White – you can check him out on YouTube.” Seemingly referring to Led Zeppelin’s one-off reunion at London’s O2 in 2007, Plant added: “This is a song we’ll always play, until we split up and get back together again.”

Although the new songs were warmly received, the night’s biggest response was saved for “Whole Lotta Love” from Led Zeppelin II, which brought fans in the seats on the balcony to their feet. It closed the main set, before a one-song encore of “Little Maggie” from the new album, as fans clapped along enthusiastically.

Released on Monday (September 8), lullaby and… The Ceaseless Roar is Plant’s tenth solo album and will be accompanied by a 13-date UK and Ireland tour in November, including a return to The Roundhouse on November 12 and a homecoming show at Wolverhampton Civic Hall on November 21.

You can read our cover story interview with Robert Plant here.