Jenny Lewis and co. turn out a thrilling set in Chelmsford 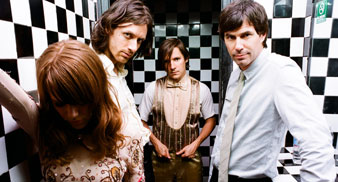 Rilo Kiley debuted a number of tracks from their new album at V Festival in Chelmsford this afternoon.

They mainly performed songs from “Under The Blacklight”, out this Monday (August 20), including “The Moneymaker”, “Close Call” and “Breakin’ Up”.

The LA group played to a small but highly enthusiastic crowd in the JJB/Puma Arena, also previewing fan favourites including “Does He Love You?”

Just after Rilo Kiley, Guillemots played a well-received set on the Channel 4 Stage, performing songs such as “Annie Let’s Not Wait” and “Trains To Brazil”, before signing off with an extended and percussion-heavy rendition of “Sao Paulo”.