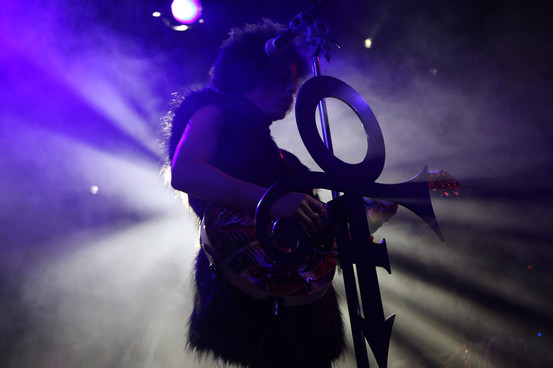 Prince and 3rd Eye Girl played almost 40 tracks during the performance with a setlist comprised of hits, covers and new tracks from ‘Plectrum Electrum’.

Some members of the crowd had been queuing for 7 hours, from the time the surprise show was announced on BBC 6Music just before midday. The ticket price was rumoured to be £70 but fans were actually charged £10 on the door. ‘How much did you all pay to get in?” asked Prince to deafening applause. “That’s nice – that’s what we used to pay to get I to concerts when I was a kid.”

Hannah Ford Welton (drums) introduced the show at 8pm appealing to the audience not to use their phones and tablets to record or take photos during the performance. “We want to ask you one simple favour – no phones or cameras. We want you to get the full effect of this show and it makes the show so much better when you guys aren’t behind technology. Are you ready for the best show of your lives?”

Prince appeared on stage in an embroidered tunic before changing into the black waistcoat and peach-gold turtleneck he wore at last week’s shows. His gold platform shoes had LED lights that lit up red or white depending on the song. Lime green lasers, lilac lights, smoke machines and three fake flames were employed on stage.

For the most part, the show was a celebration of the electric guitar with Prince and his band shredding, soloing and using all types of effects. Tracks would unravel into hypnotic versions drawn out by Prince’s virtuoso solo skills to the crowd’s delight.

A piano medley starting with ‘How Come You Don’t Call Me‘ saw a change of tempo as Prince headed to the right of the stage to play stripped-down, jazzy versions of some of his best-loved songs: ‘The Beautiful Ones’, ‘Purple Rain’, ‘Diamonds And Pearls’ and ‘Do Me, Baby’. These were followed by ‘When Doves Cry’ and fan-favourite ‘Housequake’.

“Oh my goodness, London, seriously?” said Prince, in response to the audience’s wild applause, quipping whether he could send around his ‘big, black hat’ for some cash because the ticket price was so cheap. “That’s alright, we love doing this for you.”

Celebrities in the crowd included George Clinton – who Prince described as his ‘teacher’.

The first encore of the night was an extended rendition of ‘Something In The Water’ (Does Not Compute)’ before Prince came back to play ‘Cause and Effect’, ‘Endorphinmachinee’, ‘Dreamer’, ‘Screwdriver’, ‘I Like It There,’ and ‘Bambi’. During ‘I Like It There’ he split the male and female voices in the audience into different parts.

Prince revealed to BBC 6Music (Feb 4) other venues such as Ronnie Scott’s and the Bag O’ Nails Club in Soho. Either way, he will not be replicating the O2 Arena shows he played in 2007. “That was a different time, this is a different band,” he said. “We’ll work our way up, if people like us, to bigger venues.” Quizzed on how long he plans to stay in London, he said his trip was “open-ended”, explaining, “We’re going to be here until people don’t want to hear us any more.” Tickets for the upcoming shows will also be priced reasonably for fans. “We wanna charge about $10 a ticket. This is a new band, people are getting something new.”

[Piano set]
‘How Come U Don’t Call Me Anymore’
‘The Beautiful Ones’
‘Diamonds And Pearls’
‘Purple Rain’
‘Do Me, Baby’
‘Adore’

‘Forever In My Life (instrumental)’
‘Thunderstorm’
‘When Doves Cry’
‘Sign O’ The Times’
‘Nasty Girl’ (instrumental)
‘Housequake’
‘A Love Bizarre’ (instrumental)
‘I Would Die 4 U’
‘Hot Thing’
‘777-9311’ (instrumental)
‘The Most Beautiful Girl In The World’ (sample)
‘Mr. Goodnight’ (sample)
‘Breakfast Can Wait’ (sample)
‘Play That Funky Music’
‘Something In The Water (Does Not Compute)’
‘Cause And Effect’ (incl. ‘Love 4 One Another’)
‘Endorphinmachine’
‘Dreamer’
‘Screwdriver’
‘I Like It There’
‘Bambi’