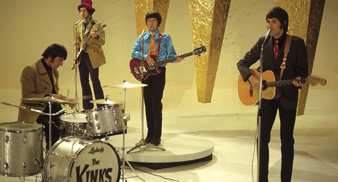 The veteran star dedicated The Kinks‘ classic ‘See My Friends’ to his old bandmate, and later played two tracks from what Quaife claimed was his favourite Kinks album, 1968’s ‘The Kinks Are The Village Green Preservation Society’.

Speaking about his old friend, who died of kidney failure last week (June 23) aged 66, Davies told the crowd, “I wouldn’t be here today if it wasn’t for him.”

Davies was backed on many songs by The Crouch End Festival Choir, who gave their backing to the likes of ‘You Really Got Me’, ‘Shangri-La’ and ‘Victoria’ – reports our sister title NME.

Glastonbury regular Davies, who encouraged crowd singalongs for ‘Sunny Afternoon’ and ‘Waterloo Sunset’, told the audience that the festival was “the greatest in the world” to huge cheers.