Thom Yorke and co. also plan to hit the road next year 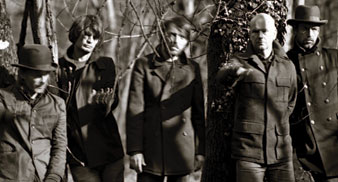 Radiohead’s Thom Yorke has revealed that the band are set to head to their Oxford studio this December and in January 2012 in order to work on new material.

The band will also tour next year, revealing that the reason they played so few shows in 2011 was because their additional drummer, Clive Deamer, was on the road with Portishead.

“It will be sort of on and off, with big gaps,” Yorke told Rolling Stone of their dates next year, adding “but not that big.”

In the interview Yorke named one new song, called ‘Come To Your Senses’, which has already been partially worked out. “We have this version of it. It’s a five-minute rehearsal, but it has the essence of what we need.”

He went on to add that “there are a few of those,” going on to say: “It would be fun to have them ready when we go to play next year. I don’t know how we would release them… It would be nice to make it all part of the flow and just enjoy it – not think about it too much.”