Radiohead's Thom Yorke joined Modeselektor on stage at the final night of Coachella last night [April 22]. The singer performed at the end of the German electro duo's set to perform "Shipwreck", from their latest album Monkeytown, contributing vocals to "This" and "Shipwreck". 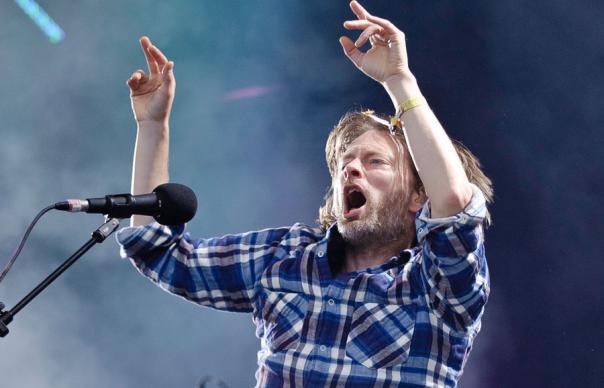 The singer performed at the end of the German electro duo’s set to perform “Shipwreck”, from their latest album Monkeytown, contributing vocals to “This” and “Shipwreck”.

Radiohead headed the bill again at the second night of week two of the festival in Indio, California at the weekend, where they played new track “Identikit”. In front of a flashy video show, which saw frontman Thom Yorke’s image distorted and projected on multi-coloured screens, the Oxford band went on the play “Idioteque” from 2000’s Kid A’ and “Lucky” from 1997’s OK, Computer.

After the show on Saturday night, Yorke DJed for a crowd of friends and family at the Parker Hotel in Palm Springs, taking to the decks at 4am and playing a set consisting of Snoop Dogg, Diana Ross and James Brown, before taking to the dancefloor himself, reports the LA Times.

It was the second DJ set of the night for Yorke, who had joined Flying Lotus and Gaslamp Killer earlier in the night.

Radiohead will tour Europe in the Autumn in support of their album King Of Limbs, including a trio of UK dates. They play Manchester’s Evening News Arena on October 6 and at London’s O2 Arena on October 8 and 9.