Queens Of The Stone Age Pay Tribute To Amy Winehouse 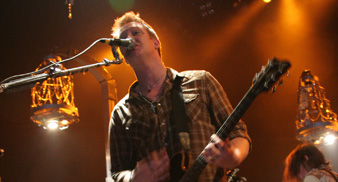 Homme squeakily spoke into the microphone, saying: “They tried to make me go to rehab, and I said ‘no, no, no’… because that’s the kind of guy I am, baby. Rehab? We could hang out on the Thursday, but I’m so busy. I’m so busy with with… nicotine, valium, vicodin, marijuana, ecstasy and alcohol. We could hang out on Friday, but then there’s the…”

The show, only the band’s third in London this year, came just days after Winehouse’s shambolic headline performance at the same venue on Friday (November 23).

They also played a handful of tracks each from their whole catalogue, Songs For The Deaf, Lullabies To Paralyze, Rated R, and their self-titled ’98 debut.

Queens Of The Stone Age played the following, in a blistering 90 minute set:

The band’s current ten-date UK tour continues in Glasgow tomorrow (November 28) and then continues to the following venues. All dates are sold-out.