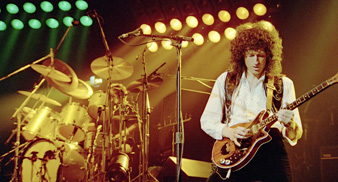 Queen want American Idol singer Adam Lambert to front the band for a live tour, according to reports.

Billboard claims that drummer Roger Taylor revealed that they were in talks with the reality TV star, after he impressed them when they teamed up for a performance of classic Queen tracks including ‘The Show Must Go On’ and ‘We Are The Champions’ at the MTV European Music Awards last month (November 6).

Taylor said: “He has grown into a really great performer with an astonishing voice with a range that’s great. We would like to work with him again. There’s nothing signed just yet but we’re talking about live dates. It could be very exciting.”

Previously, Queen were thought to be in talks with Lady Gaga about the possibility of her becoming the band’s frontwoman. Guitarist Brian May, who collaborated with the singer on her ‘You & I’ single, described the star as “very creative” and said he’d like to work with her again.

Last week, Roger Taylor ruled out the possibility of Queen releasing a new album of old demos featuring their late singer Freddie Mercury, but did confirm that the band will release a series of duets that Mercury recorded with Michael Jackson next year.