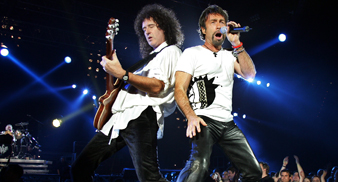 Queen have announced an additional four UK dates for their Cosmos Rocks European Tour which they will emabark on later this year.

The previously annouced six UK shows, as part of a 28 date tour, sold-out within hours, and so the band, now fronted by Paul Rodgers have announced shows for Sheffield, Newcastle, Manchester and another night at London’s O2 Arena.

The London date on November 7, will now be the band’s finale concert in Europe before they begin a South American tour.

The Cosmos Rocks tour coincides with Queen’s first new studio album for more than thirteen years. The band are currently recording with Paul Rodgers on their first new material since the death of their founding singer Freddie Mercury.

As reported last week, Queen and Rodgers are also set to perform at Nelson Mandela’s 90th birthday concert in London’s Hyde Park on June 27. The concert will raise money for Mandela’s AIDs charity 46664.

Presale for tickets for the band’s additional arena shows will be available from Wednesday (May 14) from www.queenonline.com, with general sale beginning from box offices on Saturday (May 17).

Queen with Paul Rodgers are to play the following 32 date European tour: