NIN's Trent Reznor's track will not appear on latest LP 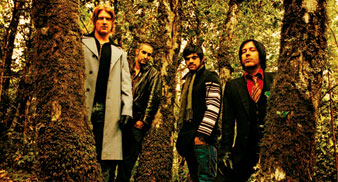 Nine Inch Nails frontman Trent Reznor’s contribution to the title track of Queens Of The Stone Age’s upcoming album “Era Vulgaris” has not made the final cut.

Even though the track will not appear, it will not be wasted. QOTSA frontman Josh Homme told Billboard.com: “We’re going to get creative about how that song comes out and where it goes.”

The album which is due out on June 12 via Interscope, does include guest appearance by The Strokes’ Julian Casablancas. He sings and plays digital guitar on the track “Sick, Sick, Sick.”

Homme says the guitar is “A lame looking thing, but it sounds really cool.”

ZZ Top guitarist Billy F. Gibbons who guested on QOTSA’s 2005 album, “Lullabies to Paralyze,” was also meant to help out on the Queen’s fifth album, however will now not be heard either due to scheduling conflicts.