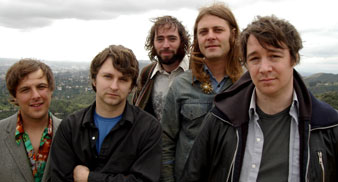 Comets On Fire are among the bands featured in a Swedish television show about the superb San Francisco Psychedelic Rock Scene.

Highlights are Comets on Fire treating us to an impromptu song intro at home and Howlin’ Rain inside their recording studio.

There is also live footage and snippets of promo videos interspersed throughout.

The filming in San Francisco intimately shows us the psych rock scene that the musicians live in, their homes, the cafes, the venues and even points out the streets where the bands play illegal gigs until the police move them on.

Ethan Miller of Comets On Fire and Howlin’ Rain champions the way San Francisco helps the artists thrive, saying, “it’s the “greatest city in the world for the underdog.”

The show Musik Bryan was aired in Sweden this weekend, but is being scheduled to be shown on TV around Europe very soon.

The show is also currently available online, the programme is in English with Swedish subtitles – and is really worth checking out.

The January issue of Uncut, out next week, features a special psych rock CD featuring all of the bands mentioned on this programme as well as tracks from Ghost, Oakley Hall and Black Mountain.