“Prince wasn’t afraid to try anything. He was fearless”

What was it like to work with a genius? Prince's closest collaborators reveal all in the latest issue of Uncut 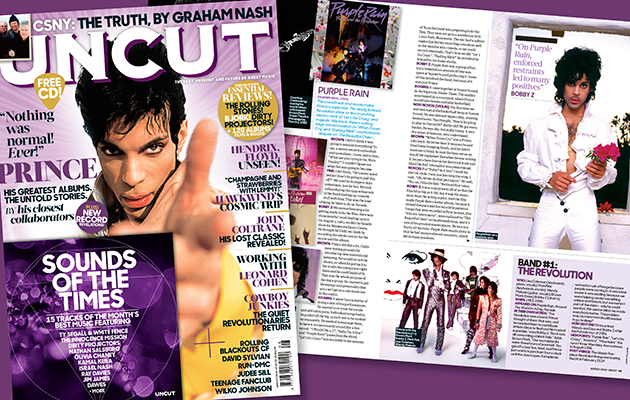 Prince Rogers Nelson would have been 60 years old this month. To mark the occasion, Warner Bros has announced the release of a previously unheard Prince album, Piano & A Microphone 1983, recorded at his home studio in the midst of his first imperial phase.

You can read our exclusive first-listen preview of the astonishing Piano & A Microphone 1983 in the new issue of Uncut – on sale now – along with an extensive career-spanning feature that tells the story of some of Prince’s greatest albums through the eyes of his closest musical collaborators, including members of his three most significant bands: The Revolution, The New Power Generation and 3RDEYEGIRL.

“He was on a mission,” says The Revolution drummer Bobby Z, who despite being with Prince since 1977, was still amazed by his boss’s creative energy. “He recorded so fast! Sometimes he’d take the time to teach or slow down to rehearse it, but a lot of times he was moving at 100 miles an hour.”

“I have watched him in a studio play all the parts, each on a first take,” confirms Z’s Revolution bandmate Matt ‘Dr’ Fink. “It went from his mind straight to his fingertips – it was astounding.”

Yet despite having the ability to write and record multi-part albums by himself, Prince increasingly came to rely on his bands as an additional creative resource. Sonny T of The New Power Generation reveals how it was easy to get sucked into Prince’s world: “We rehearsed around the clock at Paisley Park, that’s why that particular configuration of NPG was so tight… I was living there! I never went home. I’d just sleep in Studio B, in the lobby, wherever I could lay down. Rehearsals started at one, then the next thing you know there’s a recording session, and that would go until God knows when. Then the wheel would start all over again.”

Yet despite the long hours, the sheer breadth of Prince’s creative scope meant the band were never allowed to get bored. “Prince wasn’t afraid to try anything,” says NPG keyboardist Morris Hayes. “He was fearless.”

Read much more about Prince from those who knew him best in the August 2018 issue of Uncut, on sale now.