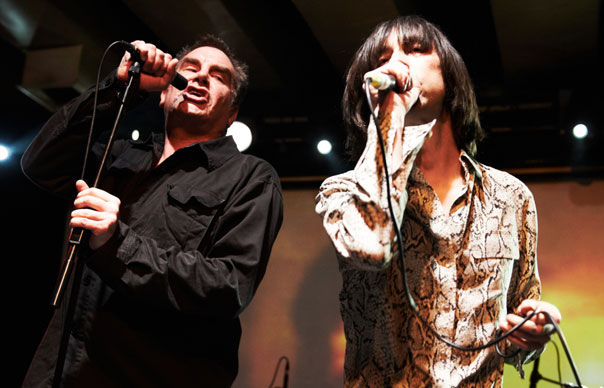 The ‘Screamadelica’ duo joined the vitriolic singer for their single, ‘Autonomia’, written about Carlo Giuliani, who was killed during a G8 protest in Genoa in 2001. The song is taken from Stewart’s new album ‘The Politics Of Envy’.

This was the first time Bobby Gillespie and Andrew Innes have appeared on stage together since Primal Scream’s New Year gig in Edinburgh. Incidentally, that show was also their last ever gig with bassist Mani, who left to re-join The Stone Roses.

Mark Stewart took to the stage in a blaze of referee whistles, as the stern, hulking figure tore through his arsenal of politically-motivated songs, including ‘Nothing Is Sacred’ and ‘Vanity Kills’.

Shortly into his hour and a quarter set, he invited Bobby Gillespie and Andrew Innes on stage to play the aforementioned ‘Autonomia’.

Finishing with ‘Hysteria’, the crowd wanted “one more song”. On his return to the stage, Stewart apologised for not having any songs left but offered up a return of Gillespie and Innes for one more run through of ‘Autonomia’.

However, during the song a fight broke out in the crowd and Stewart had to step in to intervene. Meanwhile, Gillespie held strong on stage and took over Stewart’s vocal duties while he sorted out the troublemaker.

Speaking about his collaboration with Gillespie, Mark Stewart told NME of plans to hook up again: “He’s like family to me. I’m going to be on the new Primal Scream album. He’s helped me out, so I’ve returned the gesture.”