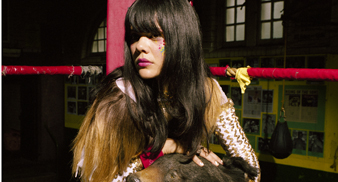 Just across the field, Natasha Kahn, better known as Bat For Lashes will be headlining the Uncut Arena Khan returns to Latitude after a storming late afternoon gig, complete with medieval dancers on the Obelisk Arena’s stage. Bat For Lashes will bring to a close, a day, which is likely to see strong performances from the likes of New York darlings Chairlift,The Temper Trap who are an Australian four-piece who throw programmed synths at their guitars, Divine Comedy‘s Neil Hannon’s ‘observations’ on cricket with The Duckworth Lewis Method and New Wave veterans Squeeze.

The Obelisk Arena has The Broken Family Band, Ladyhawke, The Pretenders and Regina Spektor all lined up today. Scroll down for a full line up below.

Of course, Latitude is not just about music and Friday will see an array of wonderful things happening. Solo artist Jeremy Warmsley will be interpreting Tom Waits songs into French in the Film & Music Arena. Robin Ince will be hosting the first two of his regular ‘Book Clubs with Friends’. Those froends including Josie Long, Ben Goldacre, Helen Zaltzman and Robyn Hitchcock. Sadler’s Wells also take over down by the lake today, with excerpts from Swan Lake and they also present a brand new piece ‘The Art of Not Looking Back’ too.

Uncut will be bringing you news, reviews, blogs and pics from Latitude 2009 for the next three days : Stay in the loop with festival news at our dedicated blog here.

Feel free to send us your comments via Twitter. Your observations will be published here at uncut.co.uk.