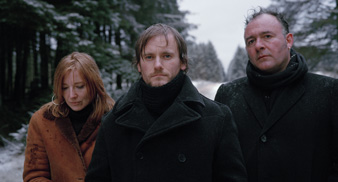 Portishead look set to begin work on a new album.

Mainman Geoff Barrow confirmed that the Bristol band are set to start writing the follow-up to 2008’s ‘Third’ this summer.

“I’m writing for Portishead through July and August,” he told BBC 6 Music. “I just want to bang on and get another record done.”

Barrow also revealed that the band have now signed a new record deal. “It’s with a major,” he said, “It’s with the biggest record company in the world. It’s with people we trust, which with a band is the most important thing.

“We did the ‘Third’ record, it did incredibly well. We got very little support from the UK as we don’t represent a certain demographic of people, but we did Coachella [festival] and that was amazing.”

There is currently no confirmed album title or release date.