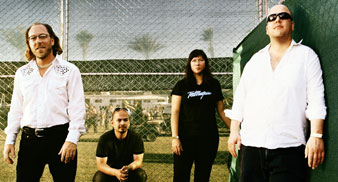 Pixies frontman Black Francis has suggested the band may record again in the future.

Despite the legendary group’s return to live work in 2004, only one song, “Bam Thwok”, was ever recorded and released.

Speaking to NME.COM, Francis said: “It’s just a waiting game right now. Whatever we do in the future is gonna have to be fresh.

“I have to see if the band as a whole wants to go into the recording studio for a new record,” he added. “That makes sense on some level. For us, there’s gotta be an angle. It can’t be just playing our old songs over and over.”

Pixies haven’t released an album since 1991’s “Trompe Le Monde”, although Black Francis and Kim Deal have pursued high-profile careers, with Francis renaming himself Frank Black and Deal performing mostly with her sister Kelley in The Breeders.