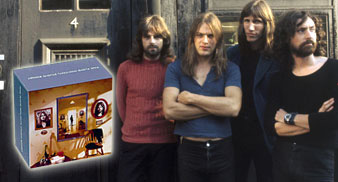 As reported yesterday on uncut.co.uk – the first full Pink Floyd studio album collection is to be released in a limited edition special box set, in early December.

It is has now been announced that ‘Oh By The Way’ featuring all 14 albums, including two doubles, are to be officially released in the UK on December 10 through EMI records, one week after the US release.

All of the albums are to come in miniature vinyl sleeves, faithfully reproduced from the original album designs.

The original extras will also be included, but in miniature form, specially reworked by long-term designer Storm Thorgerson.

For example, ‘The Dark Side Of The Moon‘ now comes with two posters and two stickers, while its follow-up, ‘Wish You Were Here’, comes with an exclusive postcard.

The albums and their extras are as follows: