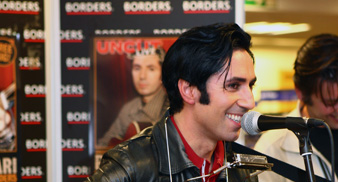 The singer, performing backed only by a guitarist from his touring band, showcased several tracks from his second album ‘A Virtual Landslide’ to the intimate audience.

The show, part of Uncut’s collaboration with Borders was to highlight the PPA’s annual Magazine Week and you can read editor Allan Jones’ live review blog here.

You can also listen to some of Pete Molinari’s songs here at his MySpace page here, myspace.com/petemolinari

And if you like the sound of a “flashback to the Village, smoky rooms, drinks flowing, the young Dylan at a microphone and people asking each other who this kid is,
because they don’t yet know his name”, then Molinari has
two shows left on his current UK jaunt.

You can catch him in Canterbury at the Farm House on
October 3 and London’s Camden Dingwalls on October 9.

Don’t forget, Wild Beasts are next up to headline Club Uncut
on November 26.