The Babyshambles singer will be defending last year's win 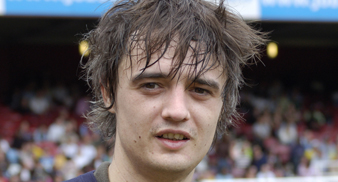 Pete Doherty has been confirmed to play this year’s Celebrity Soccer Six, in aid of Samaritans, which takes place this Sunday (May 18).

The Babyshambles front man will be defending his win with his bandmates against Razorlight at last year’s charity event.

Bandmembers from the likes of The Wombats, Faithless, Mcfly, Get Cape. Wear Cape. Fly and The Mighty Boosh’s Noel Fielding will play alongside reality TV stars from The Apprentice, Big Brother and the X Factor.

Celebrity Soccer Six tickets are available from Ticketmaster on 0844 847 2449 and online at www.ticketmaster.co.uk

All prceeds from ticket sales will be donated to Samaritans.