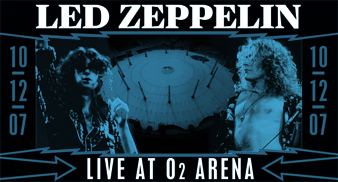 The group were then swiftly followed on by Bill Wyman’s Rhythm Kings taking to the stage, who are to be the night’s house band.

Singer Maggie Bell, rock’n’ roller Alvin Lee and Mike Sanchez then took to the stage to perform a succession of 50s soul ballads.

Foreigner then took to the stage with their biggest hit ‘I Want To Know What Love Is’, with the band being accompanied by a children’s choir for the epic sing-along chorus.

The stage was then promptly cleared, with the first half of the show all over by 8.30, it dawned on everyone in the arena that Led Zeppelin were, actually, up next. Almost as though the past few months waiting had evapurated like magic.

Their first full live show in over 27 years is scheduled to begin around 9pm, come back to the site for more details in half an hour. Uncut is trying to share the huge rock love as it unfolds, internet servers permitting.

The sheer demand of this event has crashed networks across the world in music fans determinated to have a nose at what’s been transpiring in London’s Docklands.

Meanwhile, while we wait for the main event, word is constantly filtering through about the celebs in the audience, Marilyn Manson, Bob Geldof, Liam Gallagher, Gene Simmons are all here for the biggest concert ever.

We are reporting live from the tribute to Ahmet Ertegun concert, headlined by Led Zeppelin throughout the evening. Coming up, all the bands, gossip, and fans reactions.

You can also see Uncut’s sister title nme.com for even more live coverage from the concert.