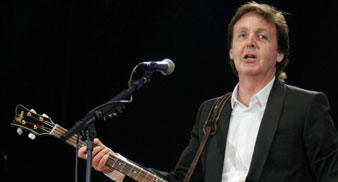 Paul McCartney has given his reaction to the news the EMI is planning to sell Abbey Road studios to cover its mounting debts.

The former Beatle explained he still thinks of the London studios fondly and said that he hopes a group related to Abbey Road can buy the building and secure its legacy.

“I do know that there are a few people who have been associated with the studio for a long time who were talking about mounting some bid to save it,” McCartney told BBC Newsnight.

“And I sympathise with them. I hope they can do something, it would be great. Obviously I’ve got so many memories there with The Beatles, and it still is a great studio. So it would be lovely for someone to get a thing together to save it.”

EMI, which is owned by private equity firm Terra Firma, is reportedly set to sell the studios for around £30 million to pay off a portion of its debts.