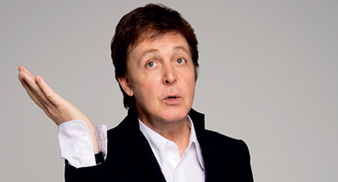 Paul McCartney has revealed that he will release a new album in 2012.

The Beatles legend has announced that the as-yet-untitled LP will be released on February 6 next year and will feature guest appearances from Eric Clapton and Stevie Wonder.

Although a tracklisting for the album is yet to be revealed, McCartney said it would feature covers of songs he was inspired by during his childhood as well as two new compositions.

McCartney said that the tracks chosen for the LP were “the songs which inspired the songs” he would later go on to write and also described them as “the songs me and John [Lennon] based quite a few of our things on”.

Speaking about songs chosen, he said: “When I kind of got into songwriting, I realised how well structured these songs were and I think I took a lot of my lessons from them.

“I always thought artists like Fred Astaire were very cool. Writers like Harold Arlen, Cole Porter, all of those guys – I just thought the songs were magical,” he added. “And then, as I got to be a songwriter I thought it’s beautiful, the way they made those song’.”

He also gave an insight into the studio sessions, revealing: “It was very spontaneous, kind of organic, which then reminded me of the way we’d work with The Beatles.

“We’d bring a song in, kick it around, when we found a way to do it we’d say ‘Okay, let’s do a take now’ and by the time everyone kind of had an idea of what they were doing, we’d learnt the song. So that’s what we did, we did the take live in the studio.”

McCartney went on to add: [quote]It was important for me to keep away from the more obvious song choices so, many of the classic standards will be unfamiliar to some people. I hope they are in for a pleasant surprise.[/quote]
Premium members of the singer’s website Paulmccartney.com can also listen to the track ‘My Valentine’, which is being streamed for the next 24 hours.

Paul McCartney released his last solo studio album, ‘Memory Almost Full’, in 2007. He is set to play a show at Manchester‘s Evening News Arena this evening (December 19) and will also play a homecoming show in Liverpool at the Echo Arena on December 20.