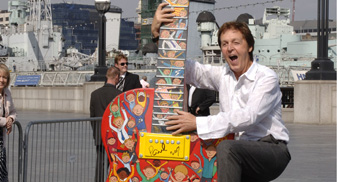 McCartney said: “I’m really amazed and very happy that the guitar went for so much and for such a great cause.”

The successful bidder has announced he will donate the McCartney guitar to Great Ormond Street Hospital in London in December.

All monies raised by the auction will go to The Prince’s Trust, Nordoff-Robbins Music Therapy and Teenage Cancer Trust.