Paul McCartney: ‘Ringo Starr was robbed of a knighthood by Bruce Forsyth’ 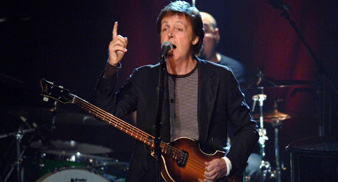 Speaking to Geoff Lloyd on Absolute Radio last night (June 16), McCartney also revealed that it was John Lennon who demanded that the Beatles end for good.

Asked why Ringo hadn’t been knighted, McCartney said: “Yeah, well, don’t look at me.” He then responded to a question about whether he could ask the Queen himself, he replied: “The last time I went by she was out. Otherwise I would have popped in and said ‘Look, love, Sir Richard Starkey‘. Because I do think it’s about time, but she probably was a bit busy with Sir Brucie.”

He added that he thought nobody would have believed that Forsyth would become a knight of the realm before Ringo.

The singer also revealed it was John Lennon who had demanded that the Beatles call it quits after the recording of ‘Let It Be’.

He said: “Basically me, George and Ringo said ‘Does this have to be final, could we do a couple of gigs or can we think about this tomorrow?’, but John was off with Yoko and he was saying ‘No, no, it’s great, I feel a release’ and all that. So that was kind of final.”

McCartney also said he believed that The Beatles back catalogue would be available on Spotify “soon”.