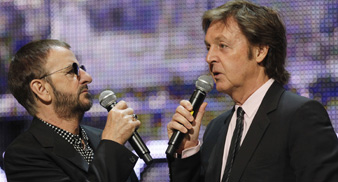 The Harmonix title’s launch, which took place at the University of Southern California was also attended by Yoko Ono and Olivia Harrison.

‘The Beatles : Rock Band’, on sale from September 9, features 45 Beatles songs which users of the game will be able to play karaoke-style, performing vocals, guitar and drums. The game is the first-ever agreed third party licensing for use of the band’s back catalogue.

Speaking animatedly about the game, at the first public viewing of the game’s graphics, Sir Paul McCartney said: “We love the game, it’s fantastic”, with Ringo Starr adding “The game is good, the graphics are very good, and we were great.”