Patrick Wolf, Will Self and The Smiths' Mike Joyce also set to appear 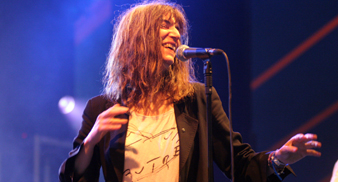 Patti Smith is to appear at this year’s Laugharne Weekend – the festival that celebrates Welsh literature and cult writing.

Smith will appear twice during the weekend, reading at the 24 capacity boathouse, which is dedicated to iconic poet Dylan Thomas, as well as performing in the main venue, Millennium Hall.

Also appearing at the literary festival will be writers Will Self, Booker Prize winner DBC Pierre, Howard Marks and Lionel Shriver.

The festival now in it’s second year, will also screen films, most notably the
premiere of new Dylan Thomas biopic ‘The Edge Of Love’, starring Keira Knightley, Sienna Miller and Matthew Rhys. Director John Maybury will be hosting a Q&A session after the film.

The Smiths‘ drummer Mike Joyce will also be showing the DVD ‘Inside The Smiths’ and answering questions afterwards.

The festival takes place in West Wales from March 28 – 30.

Tickets cost from £5, more details are available at the website here:www.thelaugharneweekend.com