Read the full transcript from the Uncut Cover Story here 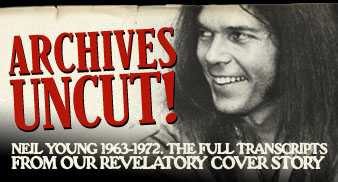 
UNCUT: Can you tell me your first impressions of Neil? Did you first meet when he was recording the first Buffalo Springfield album?
TALBOT: I liked him right away. We were young men and we had much in common. He seemed interesting and I liked his songs.

What do you recall of him coming over to your house to do a version of “Mr Soul”, with you and Danny Whitten?
I remember how the song felt and how I felt hearing it. It was slower than the version that Buffalo Springfield went on to do. I liked the way it felt acoustically, but I came to appreciate the Buffalo Springfield version as well.

Was Neil a regular at Rockets HQ on Laurel Canyon Boulevard? What kind of stuff did you get up to?
He came by a couple of times. I believe the last time he was there, the police also showed, so that kind of quelled the scene at Rockets Headquarters, as you call it.

Neil once admitted he “probably did steal” you, Danny and Ralph from The Rockets for Crazy Horse. Was it something you gladly entered into?
We just moved into being Crazy Horse quite naturally. We never thought of it being the end of the Rockets. We were naive, because, of course, it was The Rockets, where we spent hours and hours jamming on two chords, or sometimes three, or even just one chord, with
Danny and George and Leon churning out rhythm and melodies on the guitars, Ralph and I taking care of the drums and bass and Bobby soaring on the violin. You can hear a little touch of how great Bobby Notkoff is on “Running Dry” from Everybody Knows This Is Nowhere.

What do you remember of Neil sitting in with The Rockets at The Whisky A Go-Go in August ’68? Did you see the potential of Neil and yourselves together?
I remember Bobby sitting out and watching us from the audience, and Neil’s guitar sound being big. I remember it was a lot of fun.

Was Neil particularly drawn to Danny? Was there a common bond between them?
Well, yeah, naturally. Danny was a singer, songwriter and played guitar. So did Neil. And both had deep feelings and intelligence. They were both very passionate people.

Can you tell me about working up “Cowgirl In The Sand” and “Down By the River” at one of your earliest sessions at Neil’s studio? And is it true that “Down By The River” was inspired/based on Danny’s “Let Me Go”?
We worked up “Down By The River” first, as I remember. I don’t know if you would call it the Crazy Horse beat, as much as a ‘feel’. Ralph and I and Danny were used to jamming on two chords, and Neil just soared away. I think we went out on the road and then recorded
“Cowgirl In The Sand” when we came back – another two-chord jam song. As far as Neil being influenced by “Let Me Go”, I have no idea. In the song, Danny does sing about going down to the river and it does have a nice long jam in it, but other than that, I don’t know if
anyone could really say. You could wonder what Danny’s influences were when he wrote “Let Me Go”. For all of you who don’t know, “Let Me Go” is on The Rockets’ one and only album.

Can you describe the unique chemistry of Neil and Crazy Horse? Neil has talked of being especially keen on “the groove” and the abandon with which you all played.
We were just trying to be real with the feel.

David Briggs was apparently astonished at the energy and intensity of “Running Dry” when he first heard it. Can you give me your own memories of recording that song?
My memory is of Bobby Notkoff playing the violin, and Danny and Neil singing the choruses.

What do you recall of playing some shows at The Bitter End with Neil in February 1969? Neil would do a solo set first, then be joined by Crazy Horse
That was part of a tour, and was, I think, right in between us recording “Down By The River” and “Cowgirl In The Sand”. I remember that the people liked us.

Another specific gig: I believe you once played a Mafia joint in Rhode Island, where a fight broke out, the place emptied and you carried on playing. Did that really happen like that?
Yes, it did. I don’t know if it was a Mafia place, but it was in Rhode Island, and a fight did break out. Nobody bothered us and we just kept playing “Cowgirl In the Sand”. When they came back in, we were still playing.

Is true that, around 1970, Neil preferred to record during a full moon? Would you organise recording sessions around this apsect?
Yes it’s true, still is true, and it’s true for me too.

Were drugs ever an issue with Neil and Crazy Horse? For instance, Crosby, Stills & Nash used to have a ritual where they’d smoke a joint before going on stage.
We have our rituals as well.

Can you describe the studio recordings of various After The Goldrush tracks? What was the dynamic like in the studio? And what kind of instructions, if any, did Neil give?
I don’t remember any instructions as such. I think we were working together pretty much, coming up with our own answers. Of course, Neil was leading the way. Jack Nitzsche was playing piano on “When You Dance You Can Really Love” and we recorded that one up at Neil’s house. “I Believe In You” and “Oh, Lonesome Me” were done in the studio. I don’t remember which one, perhaps Wally Heider’s in LA or San Francisco.

Was “When You Dance…” the last song you all played on with Danny?
Yes. We did vocal harmonies for other songs on After The Goldrush with him after that. Also, there were sessions with Danny without Neil, recording some of Danny’s songs which were never released. The master tapes for those sessions are missing. There are some heavy generation-loss cassette tapes around. The song titles are “Share” and “Oh Boy”, among others.

Can you tell me what you remember of the song “Wonderin'”, which is likely to turn up on Archives? Do you recall recording it, or Neil first playing it to you?
Yeah, we played it on Live At The Fillmore East. Check it out. I like the way we played it back then.

Can you tell me about those two nights at the Fillmore East in 1970? Did you feel a particular vibe?
I distinctly remember being greatly excited to be playing there. Jack [Nitzsche] was playing with us. Previously we’d been touring with the four of us: Neil, Ralph, Danny, and me. Unfortunately, none of those earlier shows was ever recorded as far as I know, such as the one in Rhode Island that you referred to or several shows that we played in Cleveland at a club known as Le Cave.

What do you think are Neil’s unique qualities? What really sets him apart?
It’s a mixture of talent, intelligence, soul and hard work. He could be the definition of an artist.

Do you have a favourite Neil story? Perhaps something that throws light on a particular aspect of his character?
Yeah, I’ve got a bunch. We’ve known each other for a lot of years now – most of our lives. We trust each other and you don’t mess around with that.
INTERVIEW: ROB HUGHES