For one night only: The Beatles, the Rolling Stones and Nick Cave are coming soon to a cinema near you 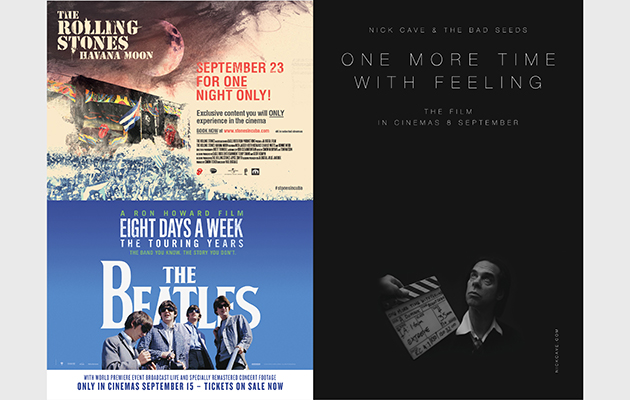 In his recent interview with Bloomberg Businessweek, behind the “I voted for Brexit” headline, Ringo Starr had some interesting things to say about the afterlife of The Beatles. “When we started with vinyl, and then CDs came out, that was good for us financially, because it wasn’t in the contract. We had to go to CDs in the end. We were pretty late there. We were late to iTunes, too, but went there so you could buy the tracks. Streaming is huge now, so we’re moving on. Who knows what’s going to be next?” During their lifetime, The Beatles were ahead of the curve – but curating their legacy seems to be a more circumspect affair.

By these standards, the latest Beatles project seems almost radical. Ron Howard’s documentary film The Beatles: Eight Days A Week – The Touring Years (which covers June, 1962 to their last concert at San Francisco’s Candlestick Park in August, 1966) is scheduled to play in cinemas for one night only on September 15 before launching on the American streaming service, Hulu. It is an unlikely piece of ‘event’ cinema from a band that historically has shied away from such unconventional practices. Additionally, the band’s sole official live album, The Beatles At The Hollywood Bowl, is being reissued after being out of print for over 30 years; though this feels marginally less consequential than Howard’s film, which comes with a swish red carpet premier and rumoured Beatle attendance.

The official reason given for Eight Days A Week’s one-off cinema booking is that it is intended to reflect the unique experience of a Beatles gig: a one-of-a-kind experience, never repeated. But there are several other one-of-a-kind, never to be repeated experiences clustered around the release of The Beatles film. The Rolling Stones are also debuting Havana Moon, the film of the their outdoor concert in Cuba in March this year, in a similar one-off global cinema event on September 23, a little over a week after The Beatles’ film. Meanwhile, Nick Cave & The Bad Seeds release One More Time With Feeling – a companion film to their new studio album, Skeleton Tree – in cinemas for one night on September 8.

The Stones have form in this department, of course. They have been experimenting with event models since 1981, when they broadcast the December 18 date of their American tour on pay-per-view and in closed circuit cinemas (no doubt, you’ll have seen the clip of Keith whacking a stage invader round the head with his guitar). Most recently, the premier of the band’s documentary Crossfire Hurricane was simultaneously broadcast in cinemas around the UK and Ireland ahead of its official release. Havana Moon is the band’s 20th concert film. The Stones have always understood the purpose of grand gestures – free concerts a speciality, playing to 1.5 million people on Copacabana beach in 2006 among them – and the show in Cuba was another historic first for Mick and co. Presumably, they hope to recoup the administrative costs of such a landmark event – free to the good people of Cuba, £17.50 not including popcorn and a fizzy drink to the rest of us.

Cave’s film, though, comes from a different place. The trailer for the monochrome One More Time With Feeling finds Cave in voiceover ruminating on a catastrophic event – the death of his son, Arthur, in July 2015, midway through the album’s making. The film partly functions as a means for Cave to address the tragedy from an artistic perspective, and at a distance, through the silent lens of filmmaker Andrew Dominik. Understandably, Cave has decided not to support either the film or the album with press interviews; the film will be all he has to say on a very difficult subject, presented entirely within the context of the album. Cave himself is no stranger to having a version of his life committed to celluloid – the wry 20,000 Days On Earth purported to chronicle a day in the musician’s life – but here you can expect Dominik will deliver a less knowing piece. Curiously, One More Time With Feeling is also being released in 3D – traditionally, the format of choice for blockbusting superhero movies.

Generally, event cinema is a useful tool for organizations like the Royal Shakespeare Company, English National Opera and Bolshoi Ballet; the V&A rolled out their David Bowie Is… exhibition as a one-off cinema event. It is less common to find rock bands streaming gigs to multiplexes round the country – though MusicScreen, the company who are distributing the Stones film, have previously broadcast live performances from Keane, Laura Mvula and KISS. As a useful comparison, Andre Rieu’s latest Maastricht summer concert played in 534 UK cinemas on Saturday, July 23 with encores the following day. The Beatles film will play on 450 – 500 screens in this country, with that figure dropping to 50 – 100 for encore screenings, while so far 150 UK cinemas will play the Cave film, with more screens being added.

It is coincidence that The Beatles, the Rolling Stones and Nick Cave & The Bad Seeds have all opted to debut new projects this way and within weeks of one another. Whether any of them will diverge from conventional promotion and release cycles again remains to be seen. Could the Stones do a Radiohead and release their mooted new blues-inspired album with a pay-what-you-want pricing model? Perhaps The Beatles could project a 3D version of Let It Be – the holy grail of unreleased Fab gear – onto the roof of 3 Savile Row before finally releasing it on DVD or Blu-ray? Maybe one day Cave could post tantalising photos of himself sniffing fruit on his Instagram account, much the same way as Beyoncé teased her Lemonade album? All of these are fanciful outcomes, of course, and shouldn’t detract from the key message here: which is of great music, historic moments and swinging shows.