New record is the 'other half of The Stage Names' 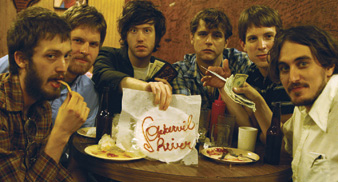 Okkervil River have revealed details about their new album The Stand Ins, due for release on October 13.

Initially conceived as a double album, the new record follows on from their critically acclaimed debut The Stage Names.

“We had so many songs we were excited about that we briefly threw around the idea of just putting out a double record. Instead, we decided to take a group of songs that fit with each other and turn that into The Stage Names, setting the rest aside for a future release, a Stage Names sequel,” said frontman Will Sheff.

The new album features 11 songs, including “Lost Coastlines,” on which Sheff and recently departed Jonathan Meiburg of Shearwater share a duet.

The band will perform at this year’s Latitude festival on July 20 before embarking on a two month tour of the US.