Plus Ida Maria, Sebastian Tellier and The Satin Peaches 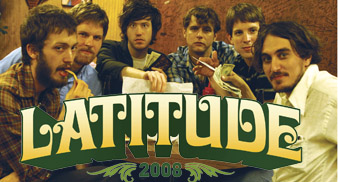 Okkervil River, Ida Maria, Glasvegas, The Satin Peaches and Sebastian Tellier have been added to the lineup at the sold out Latitude festival.

Texan rockers, Okkervil River, who recently played at the Uncut night at the Borderline, London, will play the Uncut Arena on Sunday night. Famed for their intelligent lyrics, intricate instrumentation and thematic albums, Okkervil River have enjoyed huge critical acclaim in the United States, released four albums and can count Lou Reed as a massive fan.

Ida Maria brings her unique performance to the Obelisk Arena on Saturday. The young Norwegian singer’s past performances have resulted in her bleeding profusely from head-butting a guitar, cracking her ribs so badly she couldn’t walk and attempting a punch up with the frontman of another band.

Rockabilly rebel’s, Glasvegas have been recording their debut album with Franz Ferdinand and Interpol duo, James Allan and Rich Costey and picked up the prestigious Hall Radar Award at this year’s NME Awards.

As if that wasn’t enough, there have been yet MORE additions to the Literary Arena, in the form of Ben Chaplin, Maureen Lipman, Ian Hart and Juliet Stevenson will perform as part of WordTheatre Presents…

The Theatre Arena will hold performances from the most highly regarded theatre companies and the very best contemporary playwrights including
John Donnelly, past winner of both the PMA Award for Best Writer and the NSDF Sunday Times Playwriting Award, Joel Horwood, nabokov’s playwright-in-residence, and Alexandra Wood, winner of the George Devine Award for Most Promising Playwright 2007.

Weekend tickets for Latitude have completely sold out but we have five pairs of tickets to give away. You’ll have the opportunity to see the likes of Franz Ferdinand, Sigur Ros and Interpol play live, enjoy a remarkable array of comedy, theatrical and literary talent, and possibly catch a glimpse of an Uncut staffer or two losing their marbles after 72 hours of non-stop blogging.

For the chance to win, simply log in and answer the question HERE.

For the chance to win, simply log in and answer the question HERE.

To find out the answer, you could do worse than check through our blogs from last year’s festival at Uncut’s dedicated Latitude blog.

This competition closes on June 30, 2008. As usual with these things, the editor’s decision is final, and details of the winners will be announced on our website.

Please include your daytime contact details with your entry.