The Gallaghers gear up for the DVD of their road movie 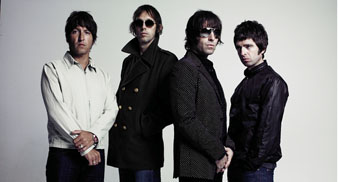 Oasis have announced they are to release the title track of their road movie, “Lord Don’t Slow Me Down”, as a digital-only single.

Marking the first time the group has put out a download-only release, the track will be released on October 21, while the two-disc DVD of “Lord Don’t Slow Me Down” follows a week later.

The single package is available from Oasisinet.com, and also includes live renditions of “Don’t Look Back In Anger” and “The Meaning Of Soul” recorded at the band’s City Of Manchester Stadium shows in 2005.

The DVD release of “Lord Don’t Slow Me Down” features a fan question and answer session with Noel Gallagher and a film of the group performing at Manchester‘s Eastlands Stadium in 2005, as well as the main feature, the full version of Baillie Walsh‘s road movie documenting Oasis‘ world tour of 2005/6.