Guitarist says he will be hitting the road in the autumn 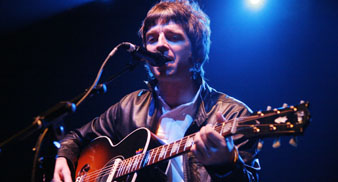 Noel Gallagher has confirmed he will be touring the UK in the autumn and will be playing Oasis songs as part of his live set.

Speaking earlier today (July 6) at a press conference to launch his new solo album ‘Noel Gallagher’s High Flying Birds’, he confirmed that he would be touring the week after the album is released on October 17. He also confirmed that the first show would be in Dublin on October 23 and that the tour would take in Manchester, London and Glasgow.

Gallagher added that he would tour again in 2012, and more extensively. He said: “I don’t think there’ll be a huge great big tour this year. I think this year it’ll be a quick whizz around the world and try and do the major cities and then it will probably be a bigger tour next year.”

He also indicated that he would definitely be playing Oasis songs on the tour, saying: “The album lasts for 46 minutes and 12 seconds, so I will play some Oasis songs. They’re my songs and I wrote them on my own. I’m proud of them and I’m proud of where they sit with what I’ve done now. I don’t think I’d ever do a gig without playing them.”