Noah and the Whale To Premiere New Film At Latitude

London folk-rock band to screen The First Days Of Spring 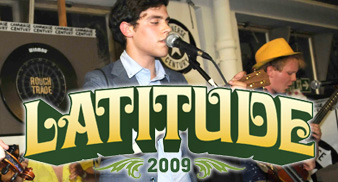 Twickenham based folk rock band Noah & The Whale are to screen their new film ‘The First Days of Spring’ for the first time in the Film & Music Arena at the Latitude Festival next month.

The film, directed by singer Charlie Fink, runs the length of the band’s second album of the same name, both of which are due for release on August 31.

N&TW’s drummer Doug Fink describes the complimentary film and music as: “Sidestepping drawn-out overanalysis, the pithiest, if crudest, aphorism we have used consistently for the sum of its parts is ‘feature-length music video’. But truly it stands as a wonderful work in its own right.”

Working with Patti Smith‘s producer Emery Dobyns on the album in New York, Fink made the accompanying film in London and Surrey with various cast members including model Daisy Lowe.

As well as getting its premiere showing at Latitide, Noah & The Whale will be performing various songs from the new album too.

Other new additions for the festival, which kicks off in less than a month now, include Turner Prize shortlisted conceptual Brit art duo Jake & Dinos Chapman who will give a talk in the Literary Arena before being quizzed by Newsnight Review’s Miranda Sawyer.

The full list of latest additions for Latitude are as follows, tickets for the four-day event are still on sale, for £150, and are available to buy here: www.latitudefestival.co.uk, all tickets include camping.

Stay in the loop with all Latitude festival news at our dedicated blog here.


For your chance to win one of ten pairs of tickets with uncut.co.uk, click here for our competitions page.


For more music and film news from Uncut click here