No Jagger For Zep Show

Rolling Stones front man won't be playing after all 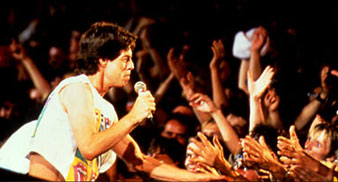 Mick Jagger has issued a brief statement officially denying that he and fellow Rolling Stone Charlie Watts will be joining the bill for the Led Zeppelin show at London’s 02 Arena on December 10.

Jagger declared: “Contrary to media speculation Mick Jagger and Charlie Watts will not be participating in any way at the Led Zeppelin Concert in December but wish them well for a great gig.”

The show, a tribute to Atlantic Records’ founder Ahmet Ertegun, will also include Ex-Stone Bill Wyman’s Rhythm Kings, who will perform as the concert’s ‘house band’ backing the other artists on the bill.

Earlier in the week, The Who‘s Pete Townshend spoke out at critics who’d attacked Robert Plant for reforming Zeppelin.