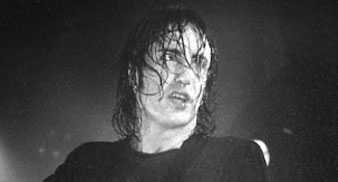 Nine Inch Nails have revealed the tracklisting for their new studio album “Year Zero” on their website, www.nin.com.

Front man Trent Reznor’s most recent blog post on the site says: “Is it possible I am actually finished writing and recording a new nine inch nails record? Apparently so. We begin mixing in January! Juggling fifteen all-new tracks around. Testing sequences. No leftovers from “with teeth”. Highly conceptual. Quite noisy. Fucking cool”

There are however, sixteen tracks listed on the site now, so presumably, one more new track has been worked on in the last few weeks.

“Year Zero” is due for worldwide release on April 6 and the tracklisting is:

Hyperpower!
The Beginning Of The End
Survivalism
The Good Soldier
Vessel
Me, I’m Not
Capital G
My Violent Heart
The Warning
God Given
Meet You Master
The Greater Good
The Great Destroyer
Another Version Of The Truth
In This Twilight
Zero-Sum

Nine Inch Nails will play the following UK shows at the end of the month, including four sold-out nights at London’s Brixton Academy: