With The Beatles set to reissue their 1967 film Magical Mystery Tour, previously unseen footage of the band making the film is being shown online. 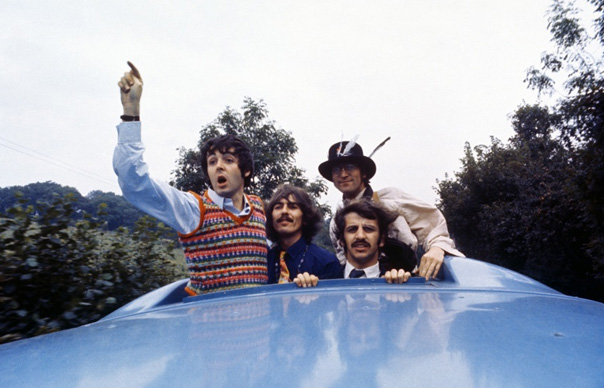 With The Beatles set to reissue their 1967 film Magical Mystery Tour, previously unseen footage of the band making the film is being shown online.

Released in the wake of the release of Sgt. Pepper’s Lonely Hearts Club Band, Magical Mystery Tour was The Beatles’ third film and documents a coach trip to the seaside. It was first broadcast on Boxing Day in 1967 by the BBC. It was not well received. It has only been shown once since, in 1979. A digitally remastered version of the film is due to be screened this Saturday [October 6] on BBC2, after a new documentary on the story of the film produced by the BBC’s Arena documentary strand.

From today [October 2], a first glimpse of previously unseen footage is available from thespace.org. The short clip shows The Beatles on a coach trip to a fish and chip shop shop en route to Newquay – the final destination of the Magical Mystery Tour.

Arena Editor, Anthony Wall says, “Few people have seen Magical Mystery Tour in its entirety and the material in the chip shop has never been shown anywhere. It captures perfectly the fabulous world of The Beatles at this time.”

He added: “They’re happily sharing a simple meal with the other passengers on the coach as the astonished residents of Taunton gather outside and at the same time creating an extraordinarily avant garde film, which of course would soon be broadcast by the BBC to a dumbstruck nation.”

The fully restored edition of the film will be released on October 9 with a remixed soundtrack and special features, including other scenes that were cut from the original, as well as interviews with the band and cast.