Kurt Wagner, Yo La Tengo and Will Oldham are among the cast 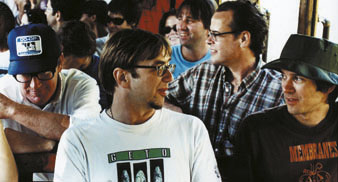 A new alt-country documentary featuring a host of Uncut favourites has screened at the Raindance Film Festival.

“Far Off Town – Dunedin to Nashville” documents underground rock legend David Kilgour’s journey from his small New Zealand town of Dunedin to Nashville, Tennessee to record his album “Frozen Orange” with his friends who just happen to be alt.country kings Lambchop.

The film features unique footage of Lambchop’s world as Kilgour travels from Kurt Wagner’s basement, to the recording studio of maverick producer Mark Nevers, via the underworld haunts of the Nashville music scene.

Culminating with a journey through the Blue Ridge Mountains to the home of Kilgour’s indie label – Merge Records in Chapel Hill – Kilgour is joined by Yo La Tengo’s Ira Kaplan and Georgia Hubley as well as members of Lambchop for a concert at the historic Carolina Theatre, celebrating Merge’s 15 years as an independent label.

The release date of “Far Off Town – Dunedin To Nashvillle” is likely to be in early 2007.