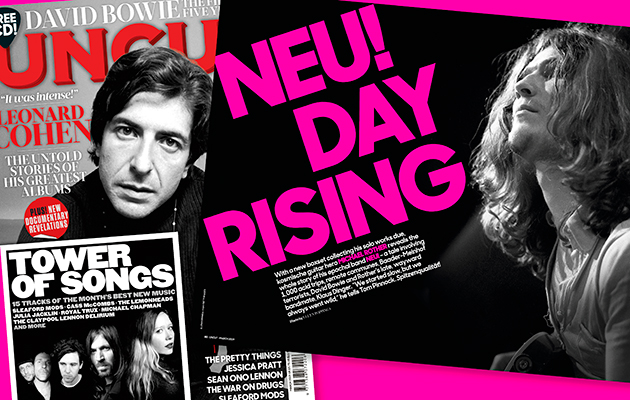 In the latest issue of Uncut – in shops now or available to buy online by clicking here – Neu!’s Michael Rother recounts his wild years with Klaus Dinger at the vanguard of German experimental rock.

After a chance meeting at a Düsseldorf demo led to a brief stint in Kraftwerk, Rother and Dinger soon fractured off from the future electronic pioneers to pursue their own singular rock vision. “We considered Neu! more a project, not a group,” explains Rother. “Whenever Klaus and I made music together it was Neu!. That’s how we understood our situation. There weren’t any other musicians that had the same ideas about music. Looking back, of course, that makes sense, because we were trying to be different.

“We didn’t write beforehand – Klaus  and I just got together in the studio and created music. With “Hallogallo”, we recorded Klaus’ drums and my rhythm guitar, and then I got this amazing feedback on the guitar, which enabled me to do these long, syrupy notes. We were so lucky to work with Conny Plank – at one point he turned around the tape, I heard everything backwards and thought, ‘Ah, this is wonderful!’ He made me play to the backwards sound, then turned it round again, so the new guitar was backwards. The finished recording sounds frail, as if you could take one element away and the whole thing could collapse.

“Playing with Klaus was thrilling. He was so strange and so difficult, on his own planet – but he was also this time machine, this amazing drummer who just played and played and played. Creating beauty out of pain, that’s the story. We started slow, but we always went wild.

“Neu!’s first album sold over 30,000 copies, 10,000 of which went to the UK, and a few thousand to America. People liked it. Naturally Klaus and I thought of playing live when the first album came out, but we didn’t know any musicians who were on the same path. It was very difficult, so first we tried performing as a duo, but it was destined to be a failure with just one guitar and drums. I played back recordings of bowed bass or some watery sounds on my little mono cassette recorder, but people were puzzled – in 1972, this was not considered playing live.

“We played between five and seven concerts in ’72, then gave up and recorded our second album, again in a few days. But at the last concert in Dusseldorf in the autumn, we played for the German chancellor Willy Brandt. I was a huge fan of him and his idea of reconciliation with the east. He promised change, promised to move away from traditional, very conservative post-war politics. A guy from United Artists came over to this concert, and he had this idea to take Neu! to the UK for a tour. So I really had to find a new solution. I’m not sure if I even discussed this with Klaus, but I remember hearing the second Cluster album, and the track “Im Suden”, and just the idea of those four notes on the guitar gave me hope that a collaboration with them could work.

“I visited the two guys in Forst with my guitar, and suddenly another door opened. Just playing with Hans-Joachim Roedelius, on his electric piano with some delay, I knew this was something I had to follow. When Dieter Moebius then joined us it was clear that this was where I wanted to go. Full of enthusiasm, the three of us recorded for months in 1973, creating material that was then released on Harmonia’s first album, Musik Von Harmonia, in January 1974.

“Klaus was very unhappy when I decided to leave Düsseldorf and move to Forst to live with Cluster, so  he tried to convince Roedelius, Moebius and I to throw all our forces together with him. But at that time Klaus was already becoming a difficult person. He was so strong-headed right from the beginning. It was amazing to work on music with him, but on a personal level he wasn’t among my friends. The whole gang at Forst thought he was  a person they didn’t want around. He later boasted about having taken over 1,000 LSD trips, and claimed in the ’90s, ‘My LSD ratio against Rother is 1,000 to zero!'”

You can read much more from Michael Rother in the current issue of Uncut, out now with Leonard Cohen on the cover.