And nope, it's not Archives which has been put back again 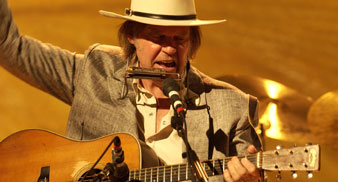 Neil Young will release Fork In The Road, an album of new material, possibly at the end of March.

Young, who is currently on tour in Australia and New Zealand until February 1, has previously uploaded the title track on his website, www.neilyoung.com.

The announcement of this release ends months of speculation regarding Young’s forthcoming projects.

The long-awaited Archives project, which was reportedly due for release in February, now appears to have been put back to Spring. There were also reports that Toast, an unreleased album recorded with Crazy Horse, would see the light of day at the end of January. This also appears to have been shunted off the schedules, at least for the time being.

Unverified reports suggest the album will find Young addressing the current economic crisis, in much the same way that 2006’s Living With War album took on George W Bush and the War On Terror.

You can read UNCUT’s verdict on Neil Young’s Fork In The Road now.