He's working with Bob Dylan and U2 producer Daniel Lanois 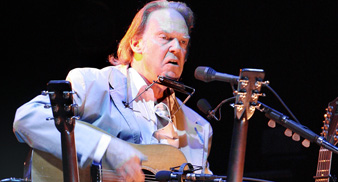 Neil Young has begun work on a new album, and is working with producer Daniel Lanois, whose previous credits include Bob Dylan‘s ‘Time Out Of Mind’ and U2‘s ‘Achtung Baby’.

News of the sessions was confirmed by Young‘s longtime cohort and Crosby, Stills, Nash and Young bandmate David Crosby, who also said he’d offered to help out if needed.

“Neil told me last week that he was having a great time talking music with him [Lanois] and just relating to him,” Crosby told Rolling Stone. “I said to him: ‘If you want a harmony, I’m volunteering.’ He said: ‘You know, if I need one you’ll be the first guy I call.’ “

Crosby also praised Young‘s ability to hold a crowd at his solo shows, and recounted a time that he and Bob Dylan stood “mesmerised” in the crowd.

“He does that [solo acoustic] thing probably better than anybody,” he said. “One of my most favourite concerts of his was him at the Wiltern in Los Angeles. He had a circle of his guitars around him and a chair, and he walked out there and sang. It was mesmerizing. He’s a fantastic musician, but also a great storyteller. I was standing there in the wings with Bob Dylan. He and I are huge Neil fans, and we didn’t move. We stood there the entire concert and just watched. We were as mesmerised as much as the audience was.”