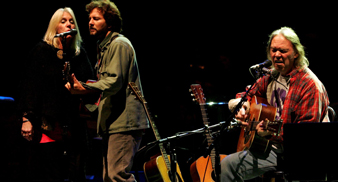 Pegi Young is to release her self-titled debut album next month through Warner Bros. Records.

The album featuring six orignal tracks as a selection of country covers is set for release on March 3, just prior to playing as special guest artist for husband Neil Young on his forthcoming UK tour.

Pegi [pictured above with Neil and Eddie Vedder at a Bridge School Benefit Show] says she’s been waiting a long time to record, but projects such as co-founding The Bridge School for children with special needs has taken up much of her time. She says: “I’ve been writing songs and poetry since high school,” she says. “It was something I’d always wanted to do but could never make time for. There were other things that took priority.”

She adds: “I’ve been living five minutes from a state-of-the-art recording studio for twenty-five years. But the timing had to align.”

Pegi will sing as guest to Neil Young on the following dates: