Neil Young Plans Massive US Tour For The Autumn

And he's bringing Wilco and Death Cab For Cutie along for the ride! 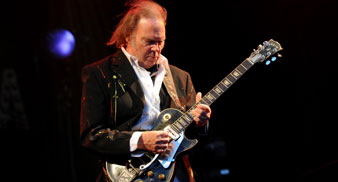 In a bid to become the hardest-working man in rock, Neil Young is heading out on a lengthy American tour in October.

With “Archives” promised for November, and “Sugar Mountain” – another vintage unreleased set – due at the end of September, the tour promises to be a compelling trawl through his back catalogue, much like his UK dates earlier this year.

To that end, Young has reconvened the same band that played on the summer leg of his European tour: Ben Keith, Rick Rosas and Chad Cromwell, plus Anthony Crawford and Young’s wife Pegi on backing vocals. Knowing Young, he’s probably knocked out another new album in the gaps between tours, but don’t quote us on that.

Anyway, the supports are strong, too. Death Cab For Cutie and Everest tag along for the first leg of the tour, from October 14 to November 5, while Wilco replace Death Cab on the bill between November 29 and December 15.

Here are those dates in full: